Instead of blogging early in the morning, I slept in until after 8, almost unheard of for me.  Silvana told me she would be going over to the Argentina side to get some shrimp for the VIP guests coming in tonight to our former room.  She said we could go with her, and she would show us the ropes of the boarder crossing, which she assured us was "So easy!"  I suppose it was, by Latin American standards.  The border area between Brazil and Argentina is treated by both sides as a special transit area, and as long as you stay within the two towns, Foz do Iguaçu (Brazil) and Pureto Iguazu (Argentina), the process is simplified.  On the Brazil side we had to turn in our exit paperwork, and this was replaced by a stamp in the passport for the border area.  On the Argentina side we had to show our passports and, most importantly, the receipts for the reciprocity fees paid to the government.  Most of these South American governments (and all of the places we will go) require this exact fee in response to the same fee imposed by the USA on their citizens.

In the infinite wisdom of the US government, nearly all foreign nationals post-9/11 are assessed a US$160 per person to apply for a tourist visa to visit the USA.  South American countries have instituted this requirement as a punitive response.   Of course the punishment is upon us, the travelers, and not the USA government.  Such is life with governments involved.  We had paid the fee online the previous day, and there was a bit of hassle getting the receipts printed with Silvana's printer being nearly out of ink.  One block down the street was an English language school, BRASAS, which stands for Brasil-American-Society.  Friends of Silvana (like almost everyone in the city), they were eager to help and very accommodating to get us the receipts printed, which are good for 10 years.

We handed over the passports and receipts to the immigration agent who chatted happily with Silvana in a crazy mix of Spanish and Portuguese.  We were each given an ink stamp good for 90 days within the special border area.  Then on to the town of Puerto Iguazu.  Silvana gave us a quick tour in her car, pointing out the best restaurants, bakery, wine store, ice cream places, etc.  Then we accompanied her to the market (where our small bag had to be sealed in a security bag to prevent shoplifting) and to the fish warehouse, where tons of frozen seafood were available.  A few minutes later, she left us to our own devices.  We walked around the town, and found ourselves near the recommended wine store.  Venturing inside the smallish shop, we saw rows of good wines arranged like library shelves.  The prices seemed reasonable, too.

MATH LESSON - Argentina has fixed the rate of exchange between their Peso (ARS) and the dollar (USD) at 5.03 pesos per dollar.  Yet Argentina is inflating their peso even faster than the madman Bernanke is inflating the supply of USD, so the real market rate is much different.  Argentines have a long history of incompetent government and the citizens have learned to ignore it for the most part.  It is illegal for banks in Argentina to exchange pesos for dollars, and foreigners who wish to exchange dollars for pesos must do so at the official rates and obtain receipts.  Only with a receipt can a foreigner then change back to their own currency.  But the Argentines just shrug and create their own free exchange markets, what the West calls "black markets."  In Argentina the free market is so well organized that they have several semi-official websites along with Facebook, Twitter, and Google+ pages.  The exchange rate is monitored and updated just like a commodity exchange.  The last I had checked, the free market rate was along the lines of 7.25 to 1 instead of 5:1.  This day it was a bit higher, and as I type this 2 days later it is higher still at 7.82:1.  You can check it for yourself at http://dolarblue.net/

Even at 5:1 the wine prices were good.  There was a young guy stocking in the back room and an older gentlemen who greeted us and left us to browse.  K soon found the high-end stuff, sealed in a room with a wrought iron gate.  As we peered through the gate, the older guy came and insisted we should go inside, opening it for us.  There were some famous Malbecs, single vinyard, limited production stuff, and the most expensive I found was about US$400 at the official rate (less at the market rate).  Most wines were under US$15, and a lot of those were well under US$10.  I decided to make an experiment.  I told the guy we did not have any Argentinian pesos (true), so that we would have to go to get some and return.  He told us in Spanish that it was not a problem, and he would happily accept Brazilian Reals or US dollars.  I inquired about the exchange rate for dollars, "¿Quanto por uno?" and he replied seis-cinquenta (6.50).  I cocked an eyebrow and he quickly pulled out a calculator and typed it out, 6.5.  We asked about a corkscrew, and he produced a nice, red, 2-stage waiter's corkscrew priced at US$3 by the good (6.5:1) exchange rate.  A bargain!  K produced a $10 bill and we received the corkscrew and US$7 in change.  Very nice, as I was expecting ARS in change, but this border town was used to dealing in 4 or 5 currencies.  With K's assistance, we asked if there was a place in the town where we could get an exchange for currency.   The young guy talked about the Casa Cambio places or the bank.  I said no bank, 5:1, not good.  The older guy asked how much we needed.  I took a shot and said "Cien" ($100).  He nodded, and agreed there could be such a place.  I asked about the rate for this place, and he said 6.5 again.  K asked flat out if the place was nearby, and he shrugged with a sly smile.  She stared him in the eye and asked if the place could possibly be here, in THIS place.  He smiled and asked us to step back into the racks of wine, a few feet away.  We complied, and he then pointed to himself and said "¡Mi Cambiar!" (I am the exchange machine!)  I offered him a hundred dollar bill, and he produced an enormous wad of ARS currency and peeled off 6 hundreds, and dug in another pocket for 50 more in smaller bills.  Easy-peasy.  I LOVE this country!  We took our leave and headed off for some cold beer to combat the oppressive heat and humidity of the day.

A few blocks away we found one of several Silvana-recommended restaurants, with air conditioning, and stepped inside.  We ordered a one liter Stella Artois, but instead received a Quilmes.  Going with the flow we found the Argentine beer to be quite nice, and much cheaper than the Stella, at ARS 28 ($US4.31) for a full liter served in an ice bucket like wine.  Being warm, we ordered a Caprese salad and Melon de Jamon appetizers to go with the beer.  Excellent bread, served with créme fraîche instead of butter - cool and delicious.  Another beer later and we settled the bill, less than $US20 in ARS.  You have to look at the prices to believe it.  Divide the prices for entrees on the menu below by 6.5 to see US equivalents. 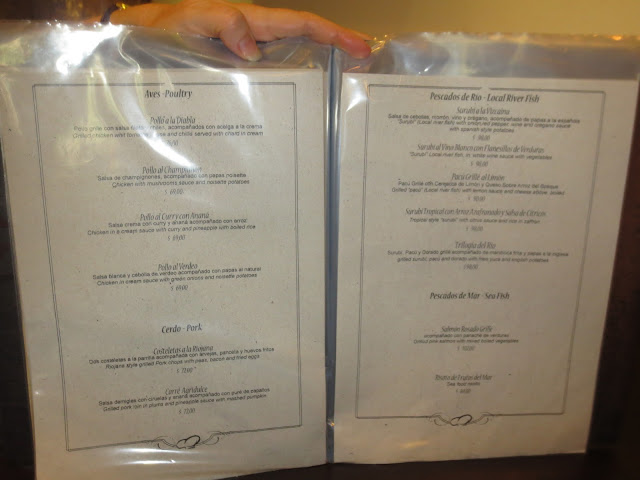 Per the caption above, that is over 1.3 POUNDS of veal for SIXTEEN Bucks US!!!!  Holy beefsteak, Batman!

I need to point out one more important point, the salads and other food were delicious - a long step above anything we had in Brazil, which was not bad.  Even Brazilians will quietly admit that Argentine food is universally better.  And the prices...  Did I mention that I LOVE this country?

The restaurant itself was quite beautiful, too.  Very upscale, and not unusual for Argentina, even in what was otherwise a small and sleepy town. 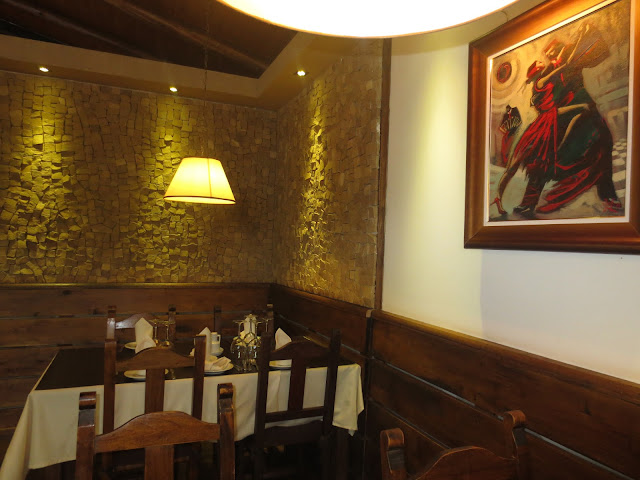 We walked around the town a bit in the oppressive heat, but found that nearly every business was closed for siesta until 4PM or later.  So we grabbed a bus back to the border for R$4 each (US$2).  On the Argentina side everyone got off the bus, showed their passports for another stamp, and back on.  But on the Brazil side they dropped us off with a transfer ticket to catch the next one, and we stood in line to get processed into Brazil, for the border area only, so we only needed a stamp and not a piece of paper.  Half an hour more in sweltering heat, and we caught the bus back to Foz and a fast plunge into the wonderful, cool pool at the Pousada.