The days started well enough with another sumptuous breakfast at Casa Lila.  Very nice place and very nice people (including Olivia the dog-person). 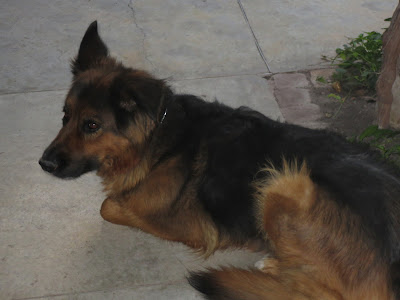 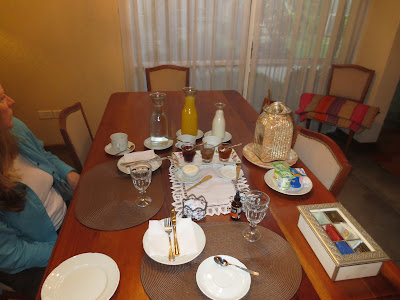 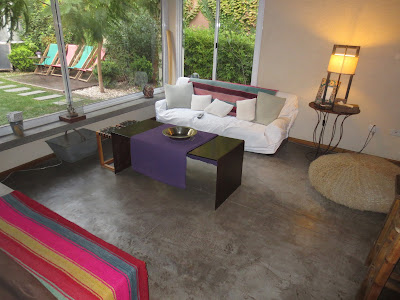 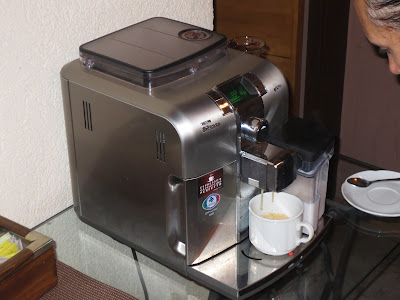 A cab was called, and US$3 and 10 minutes later we were at the bus terminal.  Our bus pulled up shortly, and we took our seats on the top deck, near the back.  The advice was to get 2 of the four front-row seats on the upper deck, but these were sold out on every one I checked.  I think we fared better in the back, as the front windows were big, but very dirty.  Between the dust and the glare, you could hardly see out the front windows.  In the back there were dozens of empty seats, and we could move from side to side and look out the back to get the best views and photos. 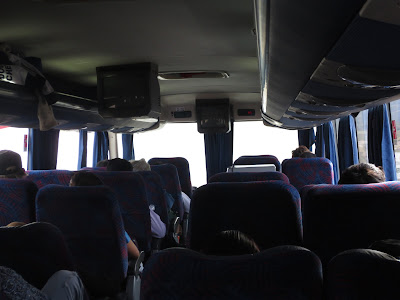 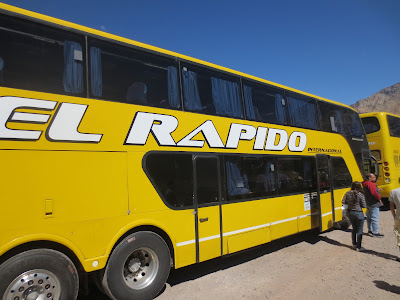 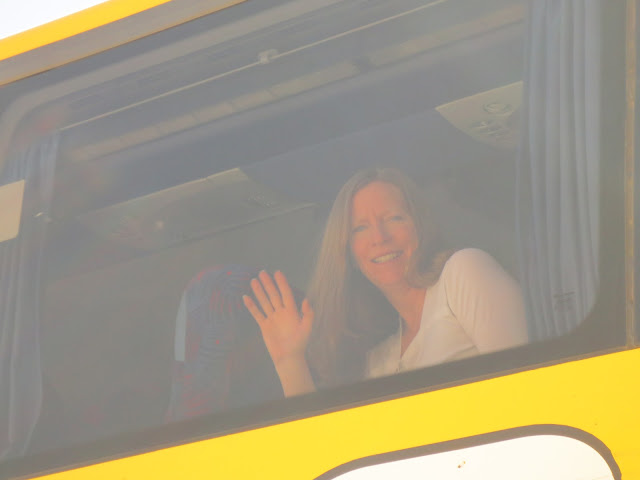 The ride out of Mendoza and into the mountains was quite beautiful, and the vistas intensified as we roared into the Andes.  The pictures do a poor job, but they are better than any word description I can make. 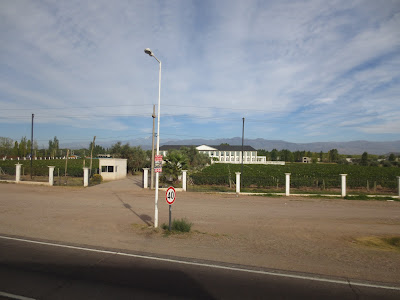 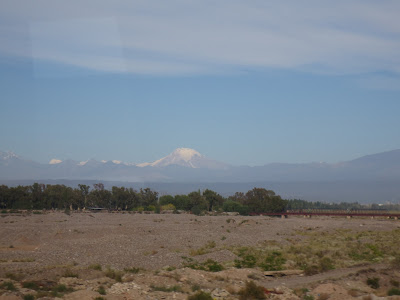 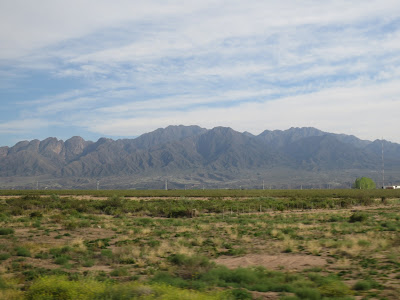 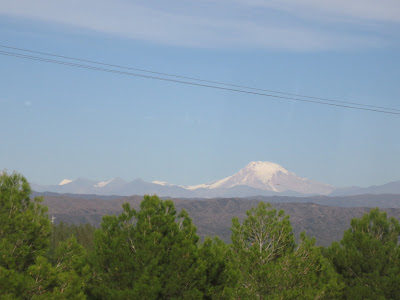 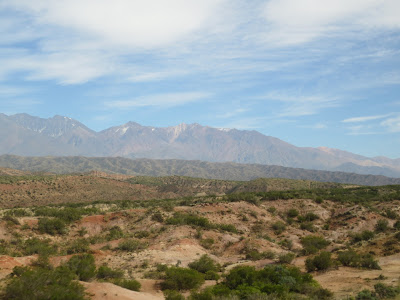 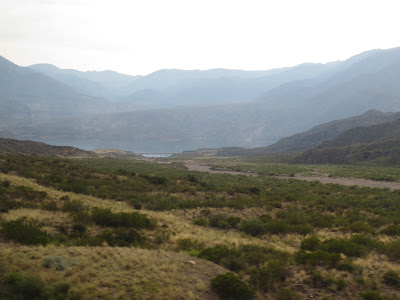 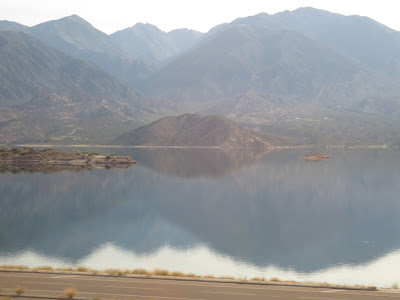 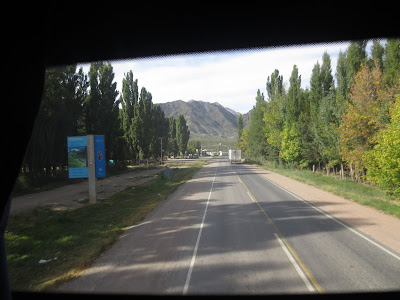 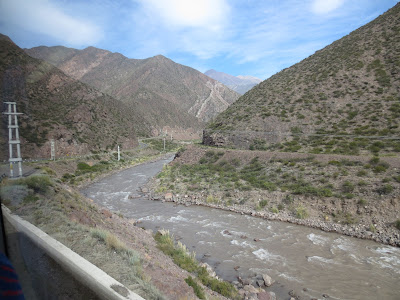 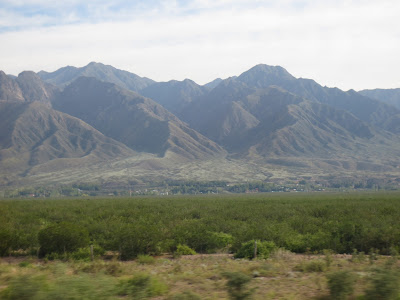 All was well until we got to the border.  Until then there was only one ten minute delay to get around this: 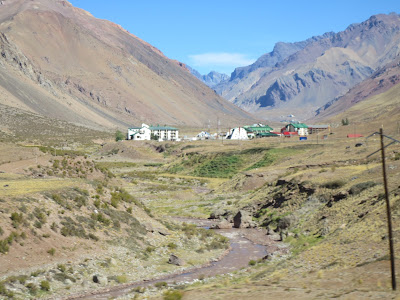 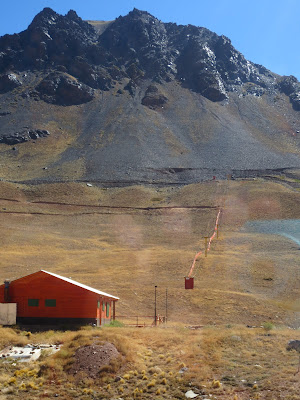 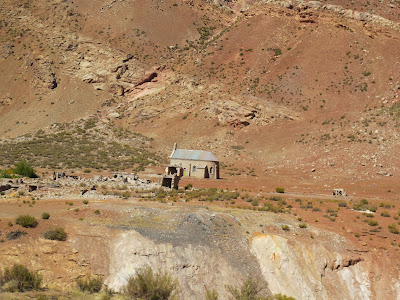 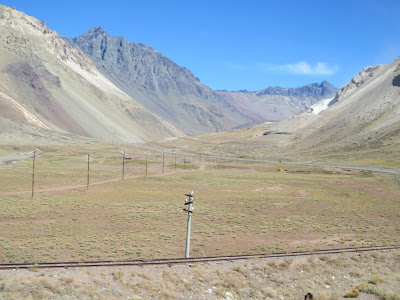 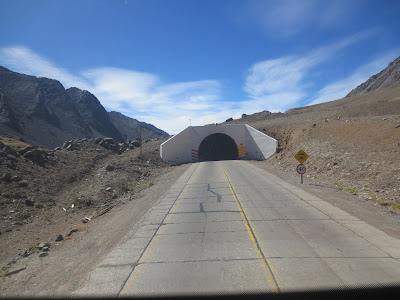 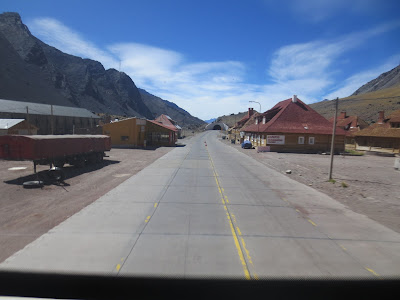 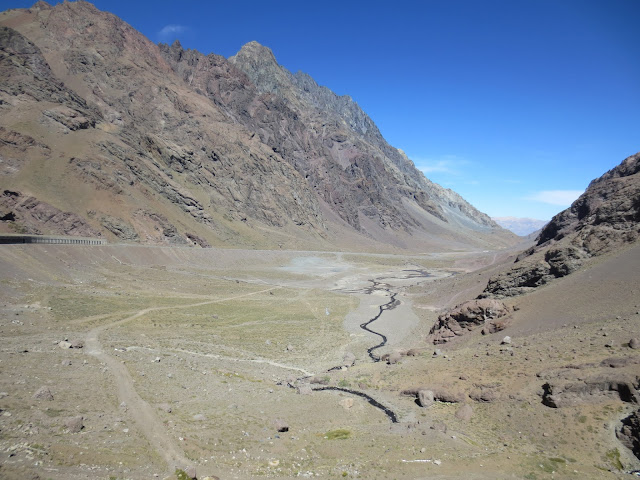 Then, at the border with Chile, everything ground to a halt.  For THREE HOURS!  Waited half an hour in the bus, then half an hour in line to stamp out of Argentina.  Then 45 minutes in another line for Chile, while the last couple from the previous bus had some horrible problem rectified with some stamping, approvals, and other signatures.  Then another 45 minutes in line to stamp into Chile.  Then another lineup with our luggage so a dog could scamper over it all.  The dog was interested in one bag, and the bag and owner were taken into a back room and beaten severely.  He had attempted to smuggle an apple (the fruit, not the computer) into Chile.  It was confiscated, and we got back into the bus 3.5 hours later.  Chile was saved from a plague of foreign apples.  (Just kidding about the beating - the young Brit was very apologetic for his crime and looked no worse for the wear when he re-boarded.)  Truly ironic, as the apple most likely came from Chile in the first place.

Then 5 miles down the road, literally downhill, traffic stopped for another hour.  The Chileans, in the zealotry to be progressive, had decided to improve the road and its 28 numbered hairpin curves by removing ALL of the road and limiting traffic to one lane, taking turns every 3 hours or so in each direction.  The one lane left no margin for error, and max speed down the grade was about 5MPH.  The hundreds of Chilean workers mostly watching a dozen other workers actually working (probably from Peru), almost all waved to our bus, so we could wave back our appreciation for their grand repavement project.  It has been going on for 2 years, and by the look of things has 10 more to go. 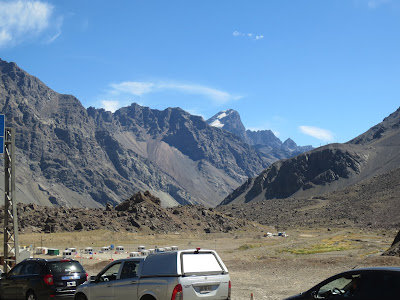 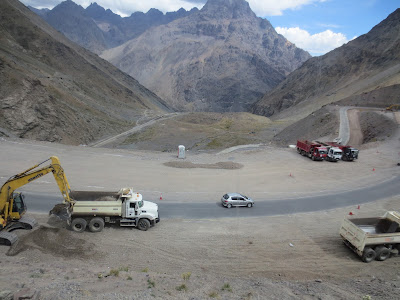 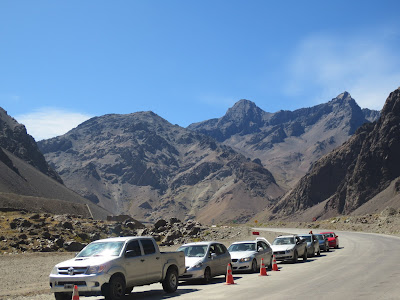 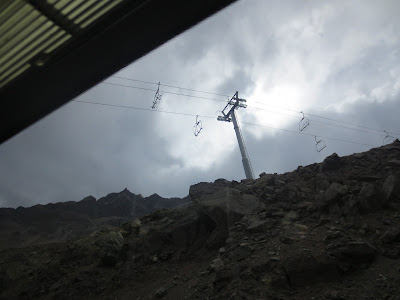 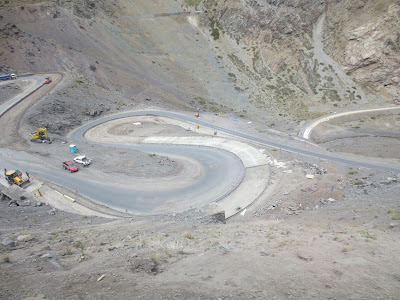 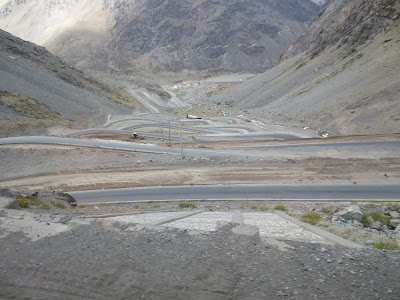 Fortunately our Argentinian bus crew had thought to provide cold ham and cheese sandwiches and cold lime soda for each passenger, a welcome snack for the late afternoon.  If the road ever gets finished, it will be one hell of a motorcycle run!  After things leveled out, the bus picked up speed as we glided through orchards and then city, finally ending in Santiago Sul Terminal and total chaos at 6:30, 3.5 hours after our scheduled arrival time.  This bus station is now famous in my experience for having the most disgusting pay toilets I have ever seen, including places like Cairo and Istanbul.  Normally I am happy to find pay toilets in the third world, as they tend to be spotlessly clean and well worth the small expense.  Not so in Santiago de Chile.  This toilet was not fit for rats.  My taking a dump there improved the place.  Enough said.

We found the Friday rush going strong and had to abandon Tur-Bus to go with Pullman to find the last two seats to Vina del Mar in the next hour, leaving 40 minutes hence.  There was some confusing finding the Pullman station, in Alameda, "next door," but some helpful Tur-Bus employees got us to the right platform.  All the late arrivals mixed with the on-time ones, but our bus showed up and departed only 5 minutes late.  A second stop filled the bus, leaving us to our last row seats, perched high above the others right next to the lavatory, behind two somewhat noisy but quite happy Chilean drunks.

Buses in Chile must display their speeds for the passengers on an LED screen, and any one of them is encouraged to narc with a toll free phone call should the driver ever exceed the posted limit or try to make up time.  Thankfully after an hour the nanny system died, and the driver put the pedal to the metal, enabling us to arrive on time to Vina del Mar two hours later, 12.5 sweaty hours after leaving comfortable Mendoza.   We quickly found our apartment building only one block away (as planned), and made our way to the place for a nice shower.  Except 5 minutes prior to our arrival at 9:30PM, the place had some kind of emergency and the water was completely out for the entire 12-story building.  Projected fix time, 10AM the next day.

Brazil?  Beautiful and Awesome.  Argentina?  Perhaps even MORE beautiful and MORE Awesome!  And Chile?  So far...